Does Alannah know something we don't?

I have previously expressed my concern (shared with many East Perth residents) about the proposal for a 60,000 (or even 70,000) seat sports stadium on the East Perth Power Station site. Well, perhaps the cat has been let out of the bag.

Speaking at the University of Western Australia Summer School yesterday (23 January), the Minister for Planning and Infrastructure, Alannah MacTiernan is reported (West Australian, 24 January, p13) as saying that the Northbridge Link, the Mounts Bay foreshore area and "other projects including the cultural centre and East Perth Power Station redevelopment would collectively deliver 10,500 residents and 19,000 jobs in the city". How likely is that if a major sports stadium were to be built on the East Perth Power Station site?

Perhaps the whole stadium proposal was smokescreen to soften up residents of the area to be more accepting of high-density residential or mixed-use development on the site.

A report was released this week that give qualified support to a light rail service between the city, Subiaco and the QEII Medical Centre. At a cost of $400 million, this would be an expensive shuttle service and does nothing to help residents of the Northern Suburbs who would only be able to get to the QEII Medical Centre by public transport by travelling through the centre of the City. Wouldn't it be more sensible to link also to Leederville Station, which provides direct train access to the whole coastal strip (north and south) without having to travel on congested central city roads. 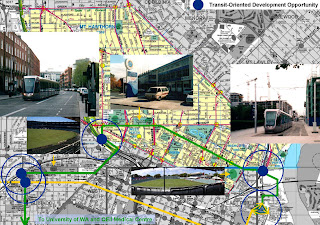 This also makes sense if the major stadium is to be located in Subiaco, as the link to Leederville could provide an alternative public transport option for people from all points north and south along the Clarkson to Mandurah railway.

And while we're about it , let's make it more of system and link round to East Perth (through Vincent) via Beatty Park and Members Equity Stadium, the East Perth Power Station redevelopment andending up in the Royal Street hub of East Perth, which could also be an eastern terminus of the Subi-City shuttle.

I must admit, though, to having severe reservations about light rail - and not only because of the cost. One of the most consistent messages that the people of Vincent have given me over the 12 years I have been a Councillor is that they want power lines put underground - and not just in residential streets. Light rail requires an intensive overhead infrastructure as well as the rails in the roadway. And those rails aren't very friendly to cyclists or pedestrians (especially those who rely on mobility aids, including wheelchairs). Earlier this year, in Cologne, Germany, I witnessed a cyclist fall when her bicycle wheel became trapped in tram tracks - fortunately there wasn't a tram bearing down on her at the time, but she was very shaken and upset. 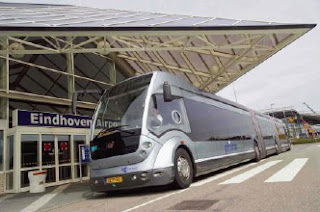 There are alternatives that are environmentally responsible and less intrusive, using, for example, in-road electronic guidance and on-board power systems such as gas/electric hybrids (similar to the Toyota Prius car) and, of course, hydrogen fuel cells. Let's at least have a look at these before inflicting yet more poles and wire on our communities.
Posted by Unknown at 8:43 PM 1 comment: Links to this post