Circuses without Bread: 888 must not overshadow 8888 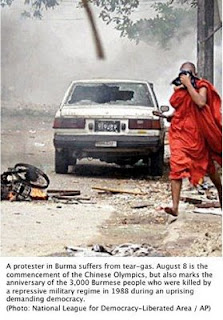 Today is the grand opening of the Olympic Games in Beijing.

Much has been made of China's human poor rights record in relation to the Olympic ideals. Comparisons have even been drawn to the Berlin Olympics of 1936, although most of these are flawed as Berlin was awarded the Games before Adolf Hitler infamously came to power.

The Chinese apparently believe that 8/8/8 is an auspicious date. Perhaps it is.

But for the Burmese people a previous date of eights, 8/8/88, was anything but auspicious. To millions of Burmese, the day will only bring agonizing memories of a defeated uprising for democracy. An estimated 3,000 fell to the bullets of a brutally repressive military regime, as the Burmese people rose in revolt on August 8, 1988, remembered since then as 8.8.88 or simply as 8888. A large number of protesters fled the country, to survive as refugee populations in neighboring countries ranging from Thailand to India. On the 20th anniversary of the uprising, the Beijing pageantry will be blurred for many, many families as they tearfully recall the time they were torn asunder.

The 20th anniversary of 8888 promises only a tough and lengthy struggle for the people of Burma, one in which they cannot hope for real assistance from the world's best-advertised democracies. Whether the very small number of Burmese athletes win medals in Beijing or not, the pro-democracy movement can only look forward to the loneliness of the long-distance runner.

[Thanks to J. Sri Raman for the above information: http://www.truthout.org/article/the-games-they-play-burma]

The spectacle and hype of the Games opening is akin to circuses without the bread for many in the world, not least those who are denied simple human rights and the right to determine their own futures.
Posted by Unknown at 12:10 PM No comments: Links to this post