The WA Government recently initiated a review of the WA Planning System and released a Green Paper outlining a range of possible proposals - https://www.planning.wa.gov.au/Planning-reform.aspx.

Submissions can be made in response to this Green Paper until  Friday 20th July.

Whilst there can be considerable improvement to the current situation, I believe that the Green Paper ignores a number of key issues, such as third-party appeals and the dominance of decision-making by so-called 'specialist members' who, almost by definition, have systematic conflicts of interest since much of their professional income is derived from large landowners and property developers.

My key contentions are that:
-  The planning process and resulting plans are inevitably seen by those seeking to maximise their financial return from investment in property as a constraint. They, therefore, have a vested interest in claiming that the system is unfair, complex or otherwise works against them.
-  The community (individually and collectively), in many cases, have neither the resources nor the incentive to participate in the development of plans. Consequently, their efforts are mainly directed at the development approval stage.
-  Community willingness to be part of the planning process is substantially eroded by development approvals that stretch the boundaries of or are in breach of gazetted planning schemes.
-  The decision-making (development-approval) process is inevitably weighted in favour of those with the greatest resources. In recent times, this imbalance has been structurally incorporated into the Development Assessment Panels, where ‘specialist members’ have an inbuilt majority. Such specialist members have an unavoidable conflict of interest, as much of their professional income is derived from large landowners and property developers.
-  The decision-making (development approval) process is weighted against the community, as there are no third-party appeal rights. Consequently approvals go unchallenged, whereas refusals are subject to ‘reassessment’ at the behest of the applicant.
-  It is critical that people and communities are effectively involved in ‘shaping strategic plans for their communities’. This will only happen, however, when it is demonstrably clear that those strategic plans actually inform decision-making and that development approvals are consistent with those plans.
-  Putting ‘specialist members’ effectively in charge of both the planning (WAPC) and the decision-making (DAPs) would be a recipe for alienation (at best) of much of the community – and more, rather than less, confrontation at the development stage.
-  To the extent that the complexity of existing plans and policies is a problem, it is more one for individuals and communities, who have limited resources, than it is for property-owners and developers, who are more likely to be in position to be able to engage professional advice.
-  To the extent that there are problems with out-of-date, conflicting or ambiguous plans and policies, the issue is only partly the planning system itself and more the way in which the system operates, including the time taken for the WA Planning Commission to assess, seek (sometimes trivial or editorial) amendments to and finally approve new local planning schemes.
-  Restructuring or reorganizing the planning system, even if it does reduce complexity and increase efficiency, carries its own costs of transition. Those with the greatest resources, typically property-owners and developers, are in a much better position to understand and adapt to the changes than are individuals and the community.
-  The Green Paper proposals for ‘connected smart growth’ take a restricted, almost physical-determinist’ view, ignoring (and sometimes running counter to) those things that make communities work and be places people want to live.

My full submission is set out below. Double-click on individual pages to enlarge. 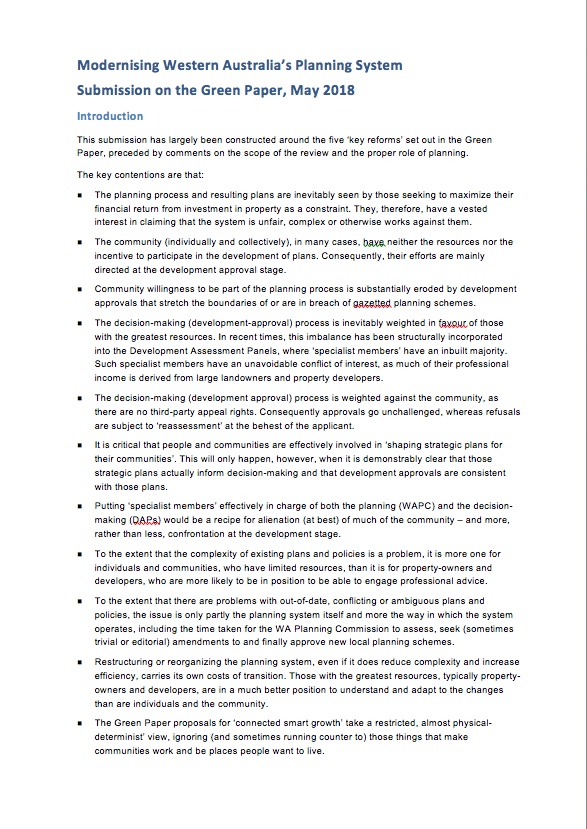 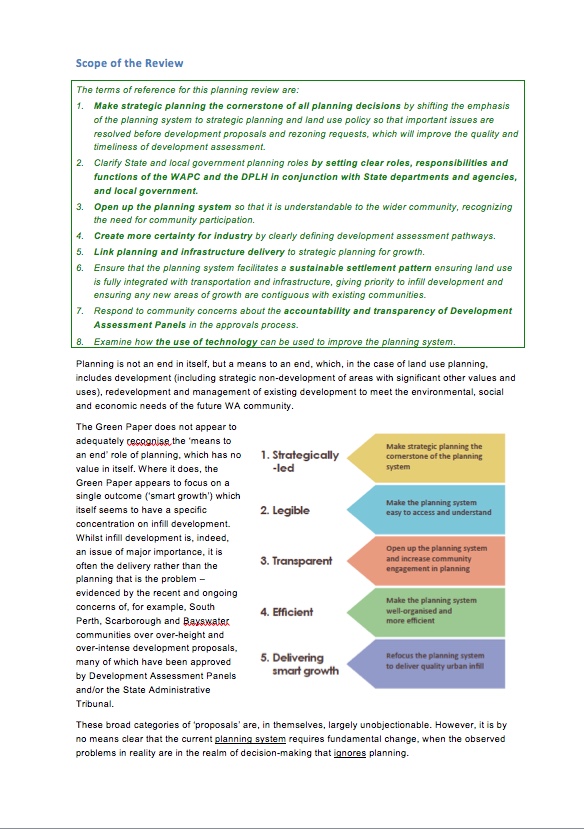 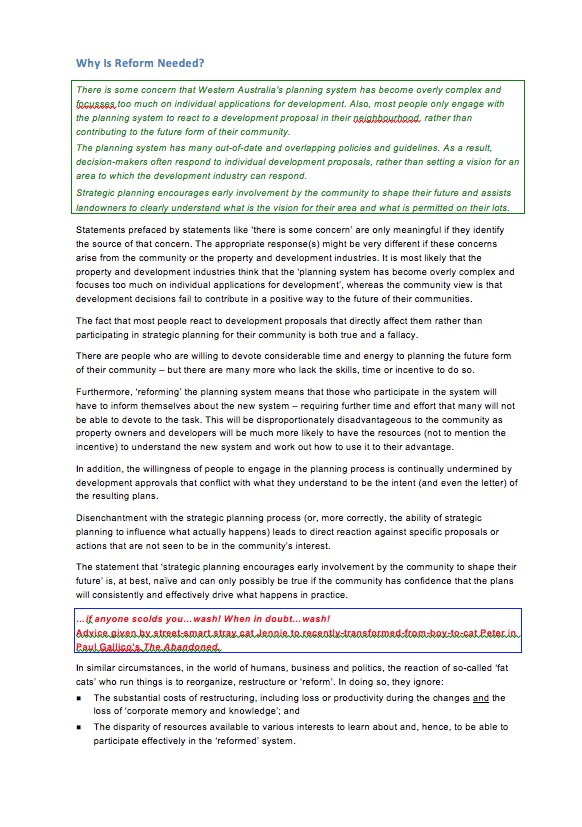 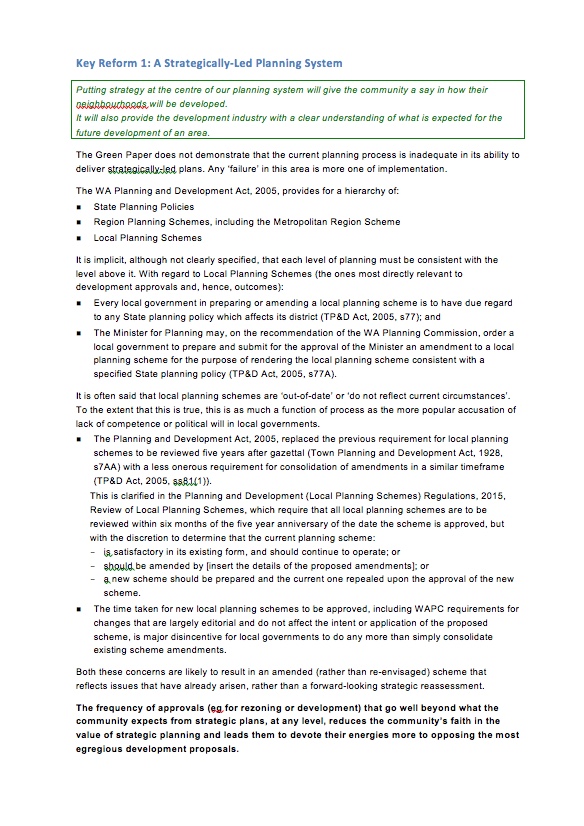 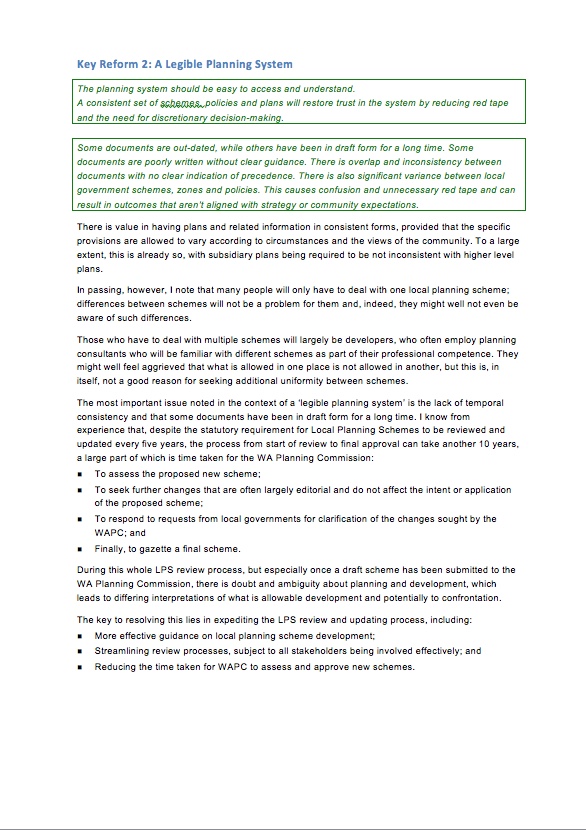 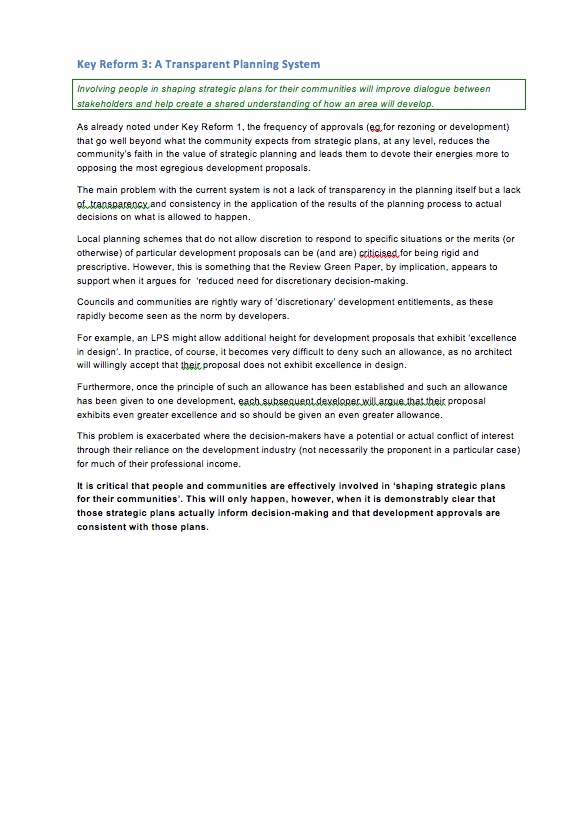 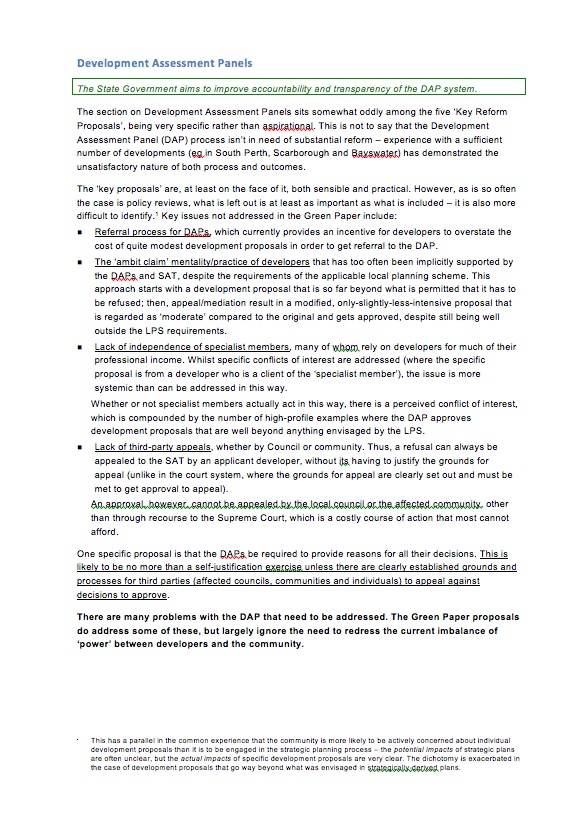 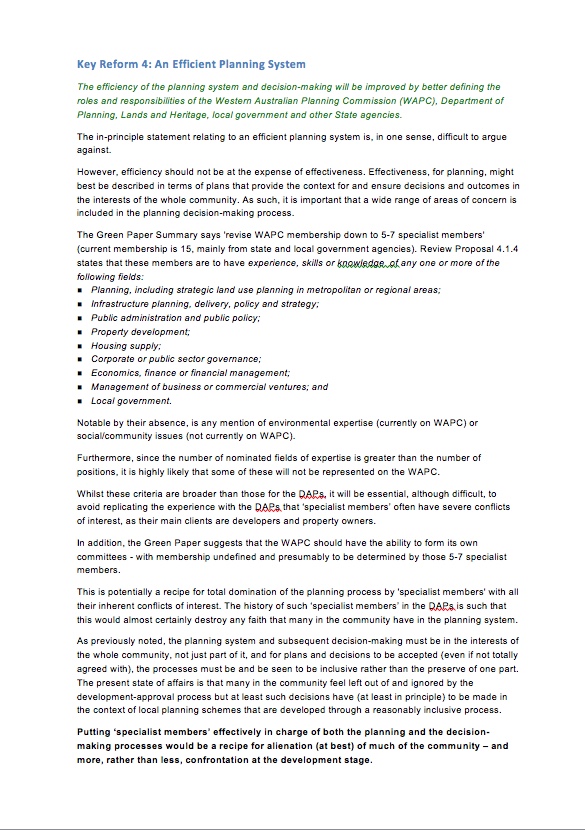 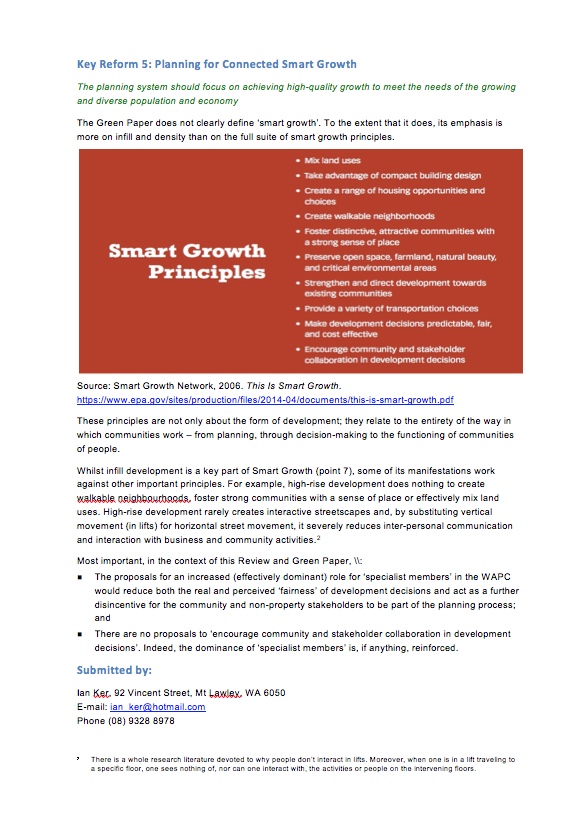 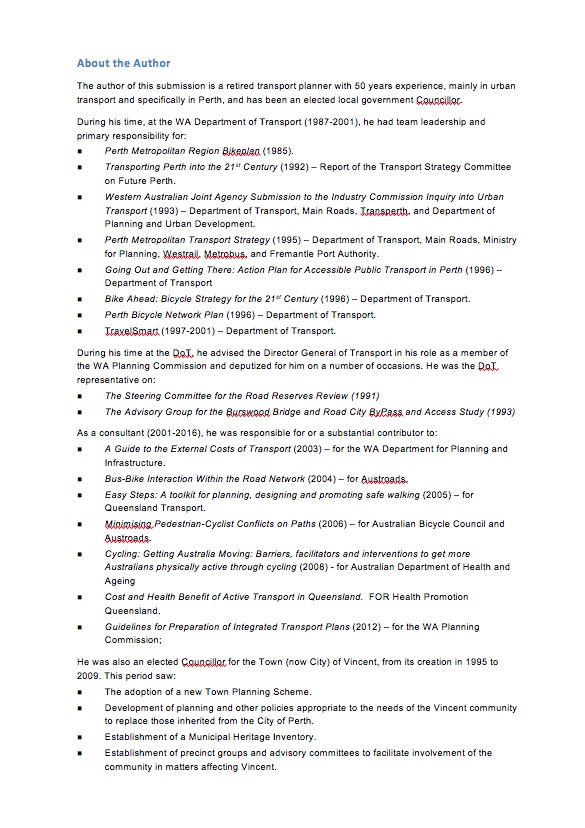