You Heard It Here First!

Two weeks ago, I drew your attention to what was in the white space between the lines of statements made by Allanah MacTiernan, Minister for Planning and Infrastructure, about the location of the new major sports stadium. That is a great present (and relief) for the Town of Vincent residents who live int he area between the railway and the river.

[Incidentally, reading between the lines is second only to being able to read upside down (when you're sitting on the opposite side of the desk from someone) in value if you really want to know what's going on. I got to be very good at both reading specialities during my years in the public service - but that's another story!]

I didn't anticipate that an announcement would be made at the same time of $500 million for a world class museum on the banks of the Swan River in the East Perth Power Station, but that is another thing that should warm the hearts of those same residents.

A museum will attract a substantial number of people - but not 60,000 at a time! Moreover, those people will be coming throughout the week and weekend, but in manageable numbers that suggest that public transport will be able to make a very substantial contribution. We will, however, still need to ensure that those who do come by car don't infringe on the residential amenity of the Banks Precinct.

The proposal I made on 24 January (previous post on this blog) looks even better with the museum. An 'inner collar' transit service will help get the crowds away from the new Subiaco Stadium in a more orderly way (especially those who are heading for the Northern or Southern suburbs). It will also provide convenient access to the new museum for many inner urban residents who live too far away to walk but don't live close to a train station - so would otherwise drive their cars. 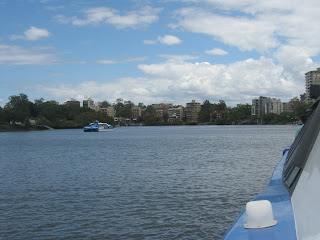 rtunities for this isolated part of Vincent. I am sure that the East Perth Redevelopment Authority will be looking closely at its plans for the remainder of the East Perth Power Station site to include a suitable mix of activities (not just residential) to take advantage of the proximity to East Perth train station (improving access for pedestrians across East Parade in the process) and the proposed "inner collar". But not with a full road link for Summers Street across the railway - more like a 'green bridge' (public transport, pedestrians and cyclists - and. of course, emergecny vehicles only), please. Who knows, it might even be sufficient to get a Brisbane-style fast ferry service (perhaps linking the Belmont racecourse development, the East Perth Powerstation Museum, the Burswood development and the City and on to the University of Western Australia).
Posted by Unknown at 7:23 PM No comments: Links to this post