DAPs To Start Feeling The Heat

Further to the previous post on the South Perth successful court action on DAPs (http://ianrker-vincent.blogspot.com.au/2016/02/david-slays-goliath-again.html), Vincent Mayor John Carey is moving a motion at tonight's briefing meeting that Council work actively to reign in the DAPs. Tonight's meeting is a briefing and the actual decision will be made next Tuesday (8th March). You can address either tonight's briefing or the Council Meeting on 8th March.

Councillor Elizabeth Re, City of Stirling, has emailed the dapaffectedcommunities group to say:

I am sorry I cannot attend the Tuesday council meeting tonight at the Town of Vincent as I will be attending the City of Stirling meeting whereby I have put forward a similar notice of motion to stop the DAP’s  at the City of Stirling  council meeting tonight.
The more Councils formalise their opposition to the DAPs (or at least the way they currently over-ride local communities and planning schemes), the more likely action to reign them is - especially with the next state election being just 12 months away. So lobby your own Council, if you can, to pass similar resolutions and make the DAPs a central issue in the next state election.
Remember, the DAP debacle comes on top of failed forced local government reform, reneging on MAX light rail, the contentious Perth Freight Link, failures of hospital programs and out-of-control state debt. 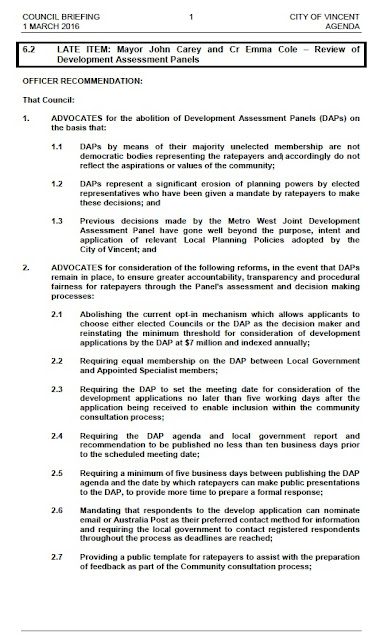 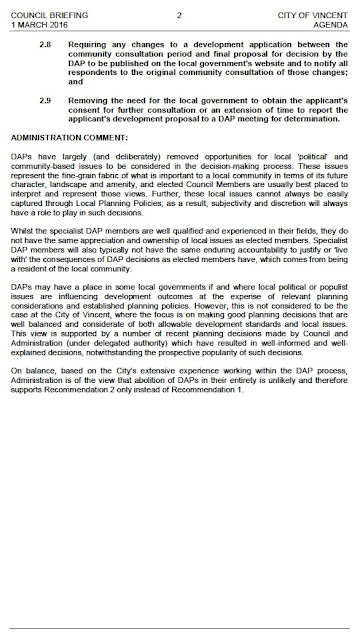 Posted by Unknown at 12:53 PM No comments: Links to this post