Initially, 34 proposals, including 12 from the Minister himself, were submitted to the LGAB. As required by the Local Government Act, these were open for public submissions for a period of 6 weeks.

The other two proposals were late submissions - from the City of Subiaco and the City of Perth. Neither of these has been put out for submissions as required by the Act - therefore, they cannot be considered and assessed by the LGAB.

Perhaps Homer is getting ahead of himself. The Local Government Amendment Bill, which is currently in the Legislative Council, would, if passed, remove the requirement for the submission period for the current metropolitan 'reform' process - but this Bill has not yet been passed by the Parliament and, in any case, it does not contain retrospective provisions.

If the LGAB considers these two 'late' proposals in the context of the totality of proposals made to it. it will potentially invalidate the whole process.
Posted by Unknown at 2:19 PM No comments:

I'm Back - and Homer still doesn't get it I've been away travelling for a few weeks - hence the lack of posts on this blog. Now I'm back - and find that that not much seems to have changed - although the City of Perth seems to have identified yet more assets it wants to take over, with its bid for the prime commercial areas of Subiaco. 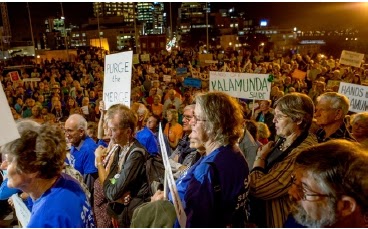 This is not unexpected, as the Minister simply deflects any questions by saying the matter is now with the LGAB for consideration. Looks like he hopes this period will allow community anger to die down - time to start proving him wrong!

I read with interest reports of the rally on the steps of Parliament House. The numbers were impressive - although, typically, the numbers reported in the West Australian were way below other estimates - even the West's own picture of just part of the crowd gives the lie to its estimate of 'hundreds'.

I was absolutely astounded, however, at the remarks by the Minister - who was reported as saying that those who attended were ill-informed or misinformed by Councils that had had their own agendas to pursue. Talk about pot calling kettle black - the Minister (and his master the Premier) have been masters of misinformation throughout this whole process.
Posted by Unknown at 1:05 PM No comments: