Dadour Provision Safe - For Now - But Minister Calls It Anti-Democratic 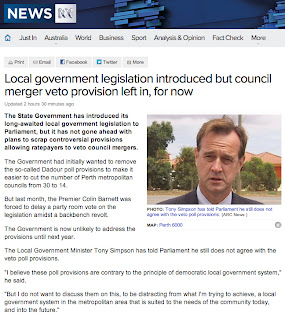 In a stunning piece of linguistic gymnastics, the WA Minister for Local Government, Tony Simpson, has labelled the Dadour provision of the Local Government Act as being 'contrary to the principle of democratic local government'.

At the same time, he has introduced legislation on his so-called local government reform that leaves this provision intact - presumably on the basis that attempting to remove it would be too unpopular to succeed. In other words, most people want to retain it - sounds like democracy to me.

The threat of an attempt to remove the Dadour provision is still there - but not until next year, it seems.

Interestingly, at the time of writing this blog (5pm) there is no media release on the Minister's website.