An Enemy That's Good To Have 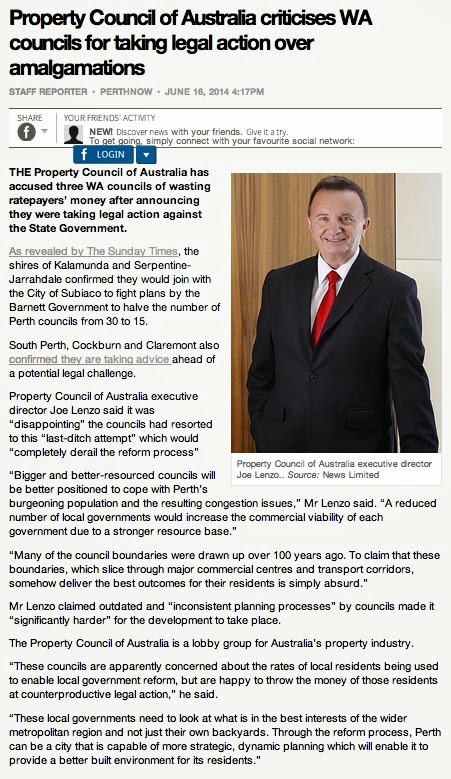 As if to prove the conspiracy theory that local government so-called reform is all about making life easier for the development industry, the Property Council comes out and slags off at Councils that are contemplating testing the legality of the process.

Anyone supporting community questioning of the bullying tactics of this government would have to be overjoyed at having the Property Council come out and say they're doing the wrong thing.

And as for being 'concerned about the rates of local residents being used to enable local government reform' but 'happy to throw the money of local residents at counterproductive legal action', let's look at the relative magnitudes. Professor Brian Dollery estimates that amalgamations are likely to cost $8 million per council - for benefits that are by no means certain and quite possibly illusory.

The cost of legal action, especially if shared between a number of councils, is likely the equivalent of less than one month's interest on that sum for any council.

But what Joe Lenzo is really saying is that the ends (making it easier for developers at the expense of the interests of local communities) justify the means ('flawed process' - on the admission of the Local Government Minister himself) - and never mind the effects on the community at large.

And should we dare to question either the ends or the means, Joe will give us a tongue-lashing.