And, to mix metaphors, the Barnett/Simpson house of cards starts to collapse.

As stated in the previous post on this blog (http://ianrker-vincent.blogspot.com.au/2014/06/shame-on-town-of-cambridge.html), it is premature to start talking about implementation of local government changes until we actually know what those changes, if any, will be.

I believe this will be first of many withdrawals from the process. This will be on the agenda at the City of Vincent Special Meeting of Electors on Monday 9th June and I believe it will be at a similar meeting in Victoria Park (date yet to be set, but will have to be before early-July). The Town of Victoria Park Mayor might have to reconsider his comment after that.

I do believe that the Southern Gazette's headline is misleading, though, as my reading of the City of South Perth decision is that it is more about the process by which so-called reform is being forced on local governments than about whether reform might be beneficial.

This is where the WA Government got it so wrong. At no time has it set out what its so-called reform is meant to achieve, other than a reduction in the number of metropolitan local governments. Nor has it demonstrated what such 'reform' would cost nor the benefits that would be achieved by it. In the absence of any form of supporting analysis of costs and benefits, Barnett and Simpson have resorted to threats and bullying to try to achieve its objective - more and more people and local councils are now seeing this for what it is - sociopathy in action. 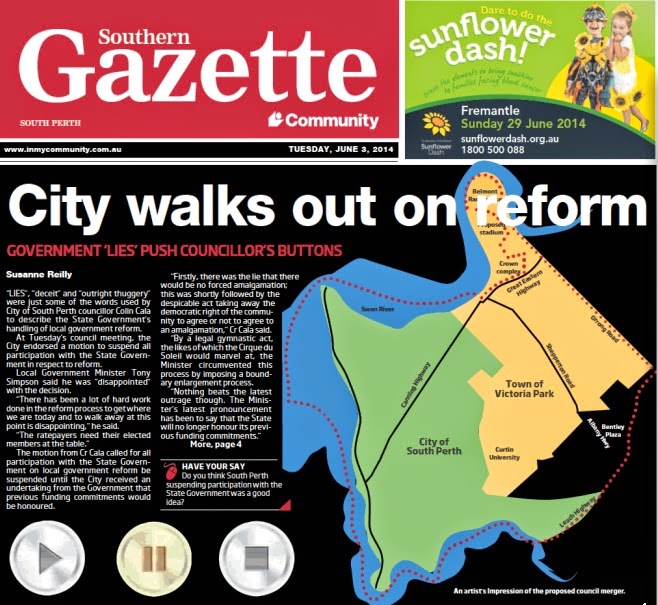 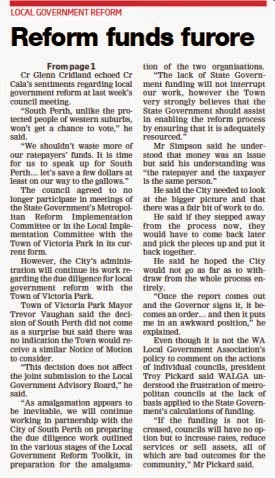